The theme of the festival is The Impossible Dream

Tartu international literary festival Prima Vista of takes place from 8th to 13th May 2023; the theme of the festival is The Impossible Dream. That choice of theme invites us to think among other things of the role of imagination and the ability to imagine and picture things seemingly behind the horizon of familiarity and feasibility, especially in our present time of crisis and conflict. Wishing for only the possible and the feasible, wanting only what is within reach already will not enrich our imagination and nothing new, nothing different will be born into the world. The genuine place of wishing, thinking of the impossible, imagining the impossible is literature.The impossible may appear here in uncountable and different forms – starting from a thorough glimpse of a better world and finishing with quaintness hidden in the smallest shape, refreshing the mind and enriching the spirit.

The patron of Prima Vista 2023 is Mehis Heinsaar and its partner town is Paide. The festival features poets, authors, critics and translators from all over Estonia as well as from other countries, the programme offers events for children, for the young, and the adults, partly in forms we are already familiar with, partly searching, experimenting and wishing for the impossible. Information about the programme and the performers will appear on the homepage in March 2023.

I HEARD A STRANGE CALL

Worlds, star systems, galaxies like living beings are interconnected by thousands of invisible threads. I heard a strange call from this country, from this town, sent me by a being – a human being, as you say, a call as an eternal yearning for goodness, forgiveness and for eternal love.

The cosmic loneliness of that being, its thirst for a higher unity, was so deep and so tender that it created a supreme sound, a wave like the music of the spheres stretching through billions of light-years, cosmic holes and dark matter to where we live.

Because, truly, there exists the supreme sound born of that yearning, forming an invisible tunnel between the galaxies of the Universe when some being on a far-off planet just happens to perceive it.

I am happy to be that far-off visitor among you. And what I want to say is this: listen to the lonely yearning in yourself, dreaming of the impossible. For it is the finest fineness of the matter, created only by a living, vibrating, doubting, suffering, imperfect, pining, changing being dreaming at the same time of the delicate empire of love.

In every billionth second that a human being dedicates to dreaming of beauty, peace, and love, a billion invisible but unbreakable building blocks are formed for that tunnel between those two – the one who calls and the one who listens – where a train moving at supersonic speed darts through the light years from one galaxy to another in a second.

Translated from Estonian by Kersti Unt 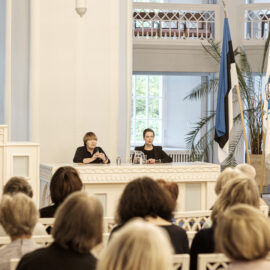 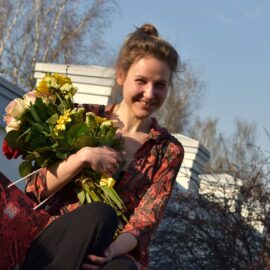